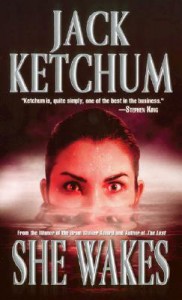 She Wakes is, apparently, an oddity in Ketchum's body of work. It's his only attempt at a supernatural novel, for starters. For all the violence and poignancy of his previous two works, it seemed like a perfect opportunity to join that voice with a different sort of subject matter. In the end, though, the novel failed in so many different ways. And the fact that it failed so spectacularly is another oddity of this book.

The story is about a writer, Dodgson, between projects, visiting Greece for an extended stay. He meets and makes friends there, and gets involved with a woman named Lelia. She turns out to be a highly disturbed individual, stalking and threatening Dodgson and his group of friends. That obsession is paired with the resurrection of one of the goddesses of the country, and that combination begins the story of one woman's revenge.

What set Hide and Seek and Cover above other thrillers was Ketchum's characterization skills. I've heard that the best way to structure a story is to start with your characters, and that's where Ketchum shined in those two books. Those skills seem to be lacking completely here. There's a lengthy prologue that meanders, and then once the story gets underway, we have shells of characters. Our main character has a bit of history to give him some semblance of complexity, but it's still not enough to define him. There are a ton of characters in this story, too, mostly introduced as was necessary for the story, and while it wasn't difficult to keep track of them all, it limited the amount of time Ketchum could develop any of them.

The supernatural aspect of the story didn't work, either. The key to writing about the supernatural is to use a firm set of rules, and make them clear to the reader, even if they don't know them all at the start. She Wakes didn't seem to have a sense of what those rules were, to the point that when the conclusion finally came, I couldn't understand why something like that would be what ended the terror. It felt anticlimactic, especially after all that the characters had been through over the course of the story.

I wanted to like this book, especially after finding out what Ketchum could do in his previous two books. I've since found out that Peter Straub once said that readers tend to go to Ketchum's books for the wrong reasons, but stay for the right ones, and I understand that sentiment. In the afterword, Ketchum tells us that he felt like he wrote this book because he wanted to write his own Stephen King story; I kind of wish he had just told another Jack Ketchum story.
Tweet