Castle in the Air 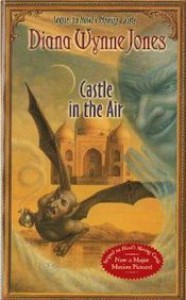 Sometimes it's hard to pick the next book I want to read (new stuff usually beats out old stuff, and the new stuff I have is numerous enough to make it difficult to select what I really really want to read next), so it's good to implement a system to help me pick the next one. This time, I decided that I had been putting off finishing up some series I had started, and figured I would go through them in reverse order from the time I read the first book. That put the Howl's Moving Castle series at the top of the list.

It's not a secret that this book is the sequel to Howl's Moving Castle -- it's a series title in Goodreads, and it's noted there on the cover of the book itself, too -- but I think readers would get the most out of it if they didn't know that it was a sequel to begin with. As it is, you don't find the connection between the two books until halfway into this one, and even then, you won't understand all of the connections until you read the entire book. Neither Sophie, Howl, nor Calcifer are the featured characters in the book, and while that isn't a bad thing (Abdullah carries this story well enough on his own), it's misleading to think of this as a sequel to the first book. Instead, think of this as another book set in the same world as Howl and his castle.

Castle in the Air opens on Abdullah, a carpet merchant in Zanzib, a fictional Arabian city, who buys a magic carpet. That carpet takes him on an adventure of his dreams -- quite literally -- when he meets Flower-in-the-Night a beautiful princess who is destined to marry the first man she meets. Abdullah being the first man she meets (for her father the king kept her isolated until he could ind a suitable husband for her), she falls in love with him, and he with her, but of course the princess then goes missing and it becomes Abdullah's purpose to find and rescue her.

Howl's Moving Castle wasn't always the most compelling book I had ever read -- it had a lot of charm and was a happy story, it just suffered a bit from pacing -- but Castle in the Air is just a straight-up fun book to read. It had the perfect cast of characters, enough so that even though I was expecting it to be a sequel, I was never disappointed that it wasn't, and had the right amount of intrigue and plot to keep me turning pages. It had me laughing at parts, grinning at others, and by the end of the book, I was engrossed with the joy of the story.

So, even if you haven't read Howl's Moving Castle (and, honestly, you really should), you should read Castle in the Air. It's the kind of story you want to share with other people, and envy them the excitement of getting to read it for the first time.
Tweet