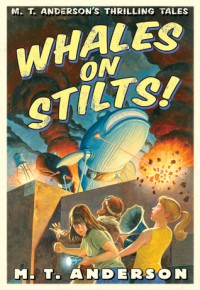 So, I’ve finished the first half of Gene Wolfe’s Shadow and Claw, comprising the first two books of The Book of the New Sun. It took me a while to get through it, and I figured that, before I started on book two, it might be a good idea to shift gears, and read something a bit more mindless, and much, much lighter. I needed to cleanse the palate, I suppose. A book about whales on stilts sounded like just what I needed.

The story is about Lily, a very average girl whose father works in an abandoned warehouse where things are very, very strange. When she visits her father on a “Spend the Day At Your Parent’s Workplace” day, he tells her, “Don’t dally when you cross this room. If you move too slowly, the guards will start shooting at your feet, and if you don’t pick up speed, they aim for your ankles.” He seems blissfully unaware of his surroundings, and treats it just like any other job. He remains unfazed by having a boss who wears a sack over his head, has rubbery blue skin, and takes toward dumping buckets of brine over his head every 20 minutes or so. Lily, though, is suspicious, especially after he mentions, shortly after meeting her, something about taking over the world.

Seriously, though, why even go through that much description? It’s called Whales on Stilts!; surely you know what’s coming once the story gets started.

The book reads like a cross between A Series of Unfortunate Events and a Looney Tunes cartoon. There are stupidly funny bits in the book, enough to make you laugh out loud, and kids are going to eat this up. There’s some clever wordplay, bits where the author speaks directly to the reader, and a whole bunch of silliness to keep you from taking anything too too seriously. It’s nothing particularly deep or memorable, but if you have some kids, or just want an uber-light book to knock out in a few hours, there are worse things to read.
Tweet