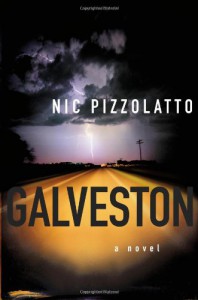 Like most everyone else who saw the TV show, I decided to read Galveston after enjoying HBO's "True Detective." I didn't need to know much more about it other than the fact that it was the same author, and that the novel got some good recognition even before the show was such a hit. I figured it would be a literary thriller, and while I was right about that, the novel turned out to be so much more.

The story is about Roy Cady, one of the muscle men behind a small-time loan sharker in New Orleans, who winds up going on the run when his boss tries to set him up to kill him. Along the way, he picks up a young prostitute named Rocky, and the journey they take from New Orleans to Galveston, Texas makes up the bulk of the story. Like the first season of "True Detective," the story flashes back and forth between the main events that happened back in 1987, and what's happening to Roy in the present, in 2008, but most of the story is set back in 1987 where they were forging what relationship they had.

I haven't read a lot of noir fiction, but Galveston certainly feels like a noir novel. It's narrated in the first person, it involves crime bosses and their goons, and the main character is a good guy with a bad history who has done (and continues to do) bad things. It's reminiscent of Joe Lansdale's more recent works, and like those works, Galveston is sharply written, with vivid, descriptive prose, witty dialogue, and notable turns of phrase that carry the story beyond being just a well-told tale. It feels deep and important, like it's telling you something you need to hear. even if it's only whispering it to you.

It's obvious that anyone who enjoyed "True Detective" will find a lot to like in this novel, but I think it would also be worthwhile for fans of Lansdale and even Charlie Huston. Shoot, anyone looking for a well-told, well-plotted story with a touch of the literary added in would find a lot to like here. It's an extraordinary work.
Tweet