House of Many Ways 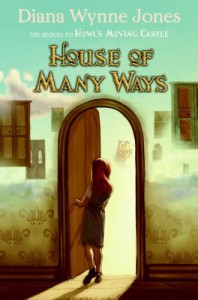 Like Castle in the Air, House of Many Ways is less a sequel to Howl's Moving Castle, and more another story that happens in the same world that features the central characters from the first book. I actually like that idea more than having the books be direct sequels (I think it opens the stories up to be more than just revisiting the main characters again), but I've discovered that how much I liked each individual book depended on how much I liked the main characters.

Howl's Moving Castle was a book where I had a hard time getting into the characters, since they weren't all that likable from the start. They grew on me, though, and by the end, it was them that made me like the book as much as I did. With Castle in the Air, I liked the main characters right from the start, and it turned out to be my favorite of the series. House of Many Ways, though, was a lot harder to get into because of Charmain.

Charmain is a bookworm, and at the start of the novel, she's sent to her uncle's house to keep it in order while he's away for a while. When she gets there, the place is a wreck, with dishes and laundry scattered all over the kitchen, but she doesn't want to do anything about it. Once an apprentice arrives and more or less forces her to start doing chores, she does them, but complains the whole time about it, and her way of dealing with it is to seclude herself and ignore it as much as she can. She's pretty insufferable, and since she's the main character, it's harder to get into the story or really care about what's happening around her. In Howl's Moving Castle, we ultimately learn why Howl and Sophie are acting like they do, and it helps us like them, but Charmain never changes.

Fans of Diana Wynne Jones or fans of the series will probably want to read this novel, but I can't honestly recommend it, even for Howl, Sophie, and Calcifer's cameos. It might have been a better book had it been a standalone book in another universe, but even then, Charmain would have to be a more likable character. It was ultimately disappointing.
Tweet